Edit
watch 01:36
We're Getting Mutants in the MCU - The Loop
Do you like this video?
Play Sound

T-Bone is a genetically enhanced T rex, and the leader of the Extreme Dinosaurs team. His signature move, that he can perform alone or with any in the group, is the "Saurian Stomp" which shakes the local ground.

T-Bone is usually attentive to the primary objective at hand, even where the others are distracted. He uses both brains and brawn when he fights against the Raptors to protect humanity from future conflicts. Like the rest of the team, he's not afraid to fight and he does have a heart of gold to match. He's also aware that Bullzeye tends to watch TV to keep up with the latest products a little too often which annoys him sometimes. In times of battle, he's calm but easy to enrage if someone dares to hurt his comrades or innocent children.

T-Bone is light brownish yellow and wears black army boots (wherein one of his claws protruded through the right or left boot), dark green pants with holes and shoulder pads with small spikes on them. He has a pair of turret-like guns on his back which can be used as weapons in the battlefield. In some pictures or drawings, he has grey eyes, 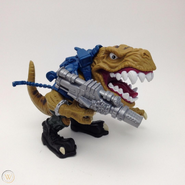 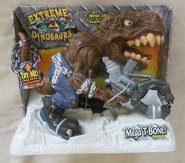