Stegz is a Stegosaurus who is the team's technological specialist and the most contemplative of the four. He can curl his body into a destructive saw blade, using the plates on his back as its cutting edge.

Stegz is intelligent and invents much of the equipment and weapons the team uses. He created a radio headset for all the team to keep in contact with each other.

Stegz is apple green and wears purple shorts and black boots as well as spiked wrist bands. He has dark green patterns down his neck to his tail.

In "Inevitable Eggztinction", Stegz builds hover cars for himself, T-Bone and Spike to get around.

Stegz only appeared twice in the Extreme Dinosaurs toyline, appearing in series 1 and the Dino Battle Paint line, where it used the same mold but now the stegosaur was painted silver. He is surprisingly absent from the Dino-Vision line, being swapped out for Hard Rock. 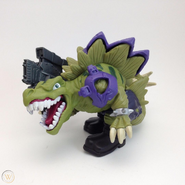