Spike is a genetically enhanced Triceratops with one broken horn who is the Extreme Dinosaurs' martial arts expert and the residential chef.

Despite his eagerness to fight, Spike tends to look after a garden in his free time. In one episode, he gets jealous of Hard Rock. He also has a heart of gold and confidence to match.

Spike is iceberg blue with a dark purple under his tail and wears brown shorts, brown leg bands, a yellow belt, and is always barefoot.

In "Raptoroid", Spike became a pro wrestler for a brief time. Spike later obtained a laser with the ability to fire ice beams in "Dialing for Dinosaurs."

Spike was released multiple times, in the first wave, Dino-Vision where he could extend his neck, and as Hunter Spike from the Battle Paint series. 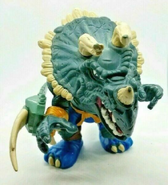 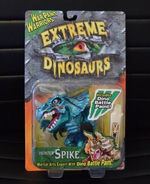