Bad Rap is the leader of a group of Velociraptors (or Raptors). They are enemies of the Extreme Dinosaurs.

Bad Rap's goal is to permanently alter the Earth's biosphere to closely resemble the Mesozoic, then conquer the planet. He has an intense hatred of the Extreme Dinosaurs because they stop him from destroying the human species. He tends to cackle when his plan is working perfectly, but he also has a short fuse when his partners try to figure out what to do next.

Unlike the other raptors, Bad Rap has his moments of clarity. In Cliff Notes, he is seen helping Stegz when both he and the stegosaur were dangling off a cliff, forming some sort of truce. The truce ended with Stegz reminding him that he plans on putting him stasis when they next meet, with Bad Rap telling him he's welcome to try.

Another moment of sentimental weakness, as he called it, was when he's watching over a bunch of eggs, the raptors assumed to be more of their kind.

He is orange with a yellow striped tail and a metal brace-like device attached to his mouth. Bad Rap also has green eyes in the show. He briefly had a weapon on one hand that dissolved solid matter effortlessly. This is later replaced by a rocket-launcher. Bad Rap wears a yellow strap over his torso and waist and black shorts.

Bad Rap first appeared in "Out of Time" when he was mutated into a vicious raptor who gained the ability to speak, run, walk and fight when it's the perfect time to strike. Argor Zardok told that he'll get another chance to bring the dinosaurs back when the climate is changed into a different one.

But his plan fails again and again when the Extreme Dinosaurs stop them from being complete. In "The Dinosaur Prophecy," he gained a new alias known as "Abysmal Rap" when he gained powers that enhanced his agility, speed and strength.

Bad Rap only appeared once in the Extreme Dinosaur toyline, being part of the Dino-Vision wave. The toy's coloring resembles the character's appearance in the Dino-Vengers and Street Sharks cartoon. 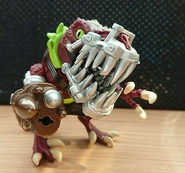